Burnfoot (Bun na hAbhann) is a village located at the base of the Inishowen Peninsula in the north of County Donegal. The village is on the R238 a gateway to the west of Inishowen and is located between the City of Derry and the town of Buncrana.

The Burnfoot River flows from east to west draining a narrow valley before flowing under the R238 and through the village. It meets the Skeoge River to the west of the village before both drain out to Lough Swilly via a tidal lagoon behind Inch Island. The Skeoge River drains an area including the outskirts of Derry City and then flows in a north westerly direction, through Bridge End and past the south west of the village to meet the Burnfoot River. The Burnfoot River is subject to flash flooding with the flat, reclaimed agricultural lands downstream subject to combined coastal and river flooding.

As part of the Government’s National Development Plan 2018-2027, €1 billion has been committed to the development of flood relief measures across Ireland. As part of this commitment, a steering group was established between the Office of Public Works (OPW) and Donegal County Council to progress a flood relief scheme to alleviate the risk of flooding for Burnfoot. In July 2020, RPS were appointed Engineering and Environmental Consultants to develop a flood relief scheme that is technically, socially, environmentally and economically acceptable for Burnfoot. 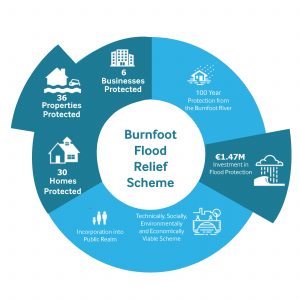 Burnfoot has had a history of serious flooding: the most recent occurring in August 2017. Up to 30 homes were flooded mostly in Líos Na Greíne and Páirc an Ghrianáin and at least seven local businesses were affected. Roads in the area where damaged and a local Waste Water Treatment Works suffered considerable damage.

The flooding was due to a high intensity rainfall event which focussed on the north west of the country and in particular Inishowen. 73mm of rainfall was recorded in an 8 hour period at the Malin Head hourly rainfall gauge which is estimated to be at least a 1 in 100 year rainfall event. The Burnfoot River exceeded its banks, particularly on the lower, south bank of the river upstream of the R238 (Main Street) bridge. The R238 is an important regional road.  The R238 bridge was impassable during the event leading to long diversions for emergency services and the local community trying to access either the other side of the village or the rest of the Inishowen Peninsula.  There is some evidence that the high intensity nature of the rainfall also led to flooding from other drains and watercourses in the area.

To address flooding issues nationally, the Office of Public Works (OPW) commissioned and completed Catchment and Flood Risk Management (CFRAM) studies covering the entire country.  The CFRAM Study was completed with support from Donegal County Council.  An output of the study identified flood risk areas, including Burnfoot, and the associated impacts of flooding. The Study also prepared Flood Risk Management Plans which set out the measures and policies to be pursued in order to achieve the most cost effective and sustainable management of flood risk.

Following the 2017 flooding the OPW commissioned a Cost Review Study to update technical inputs and determine if an economically viable Flood Relief option existed. The Cost Review Study identified a number of viable options to mitigate the flood risk at Burnfoot.

Following the launch of the CFRAM and Cost Review Study findings, RPS have been appointed to complete a detailed project level engineering assessment for Burnfoot.  The assessment will involve identification of appropriate flood relief measures and the preparation of detailed design drawings and documents.  Once complete, this body of work will facilitate submission of a planning application as per the Planning and Development Act (2000), the Planning and Development Regulations (2001) and subsequent construction of the scheme.  As part of the Scheme Development process RPS will carry out a Natura Impact Statement and Environmental Impact Assessment Report, where required under the relevant legislation.

On Wednesday 9th November 2022 the Project Team presented the Preferred Scheme to the public at An Grianán Hotel, Burt. The Project Team consists of Donegal County Council, the OPW and their consultants, RPS.

More information on the event is available under Public Information Day