Glenties (Na Gleannta) is a town located towards the south west of County Donegal. Glenties lies at the north west edge of the Blue Stack Mountains and ten kilometres from the sea. It is surrounded by mountains on three of its four sides. Glenties is located on the N56 and gets its name from being situated where two glens converge, just upstream from the meeting of two rivers.

The Owenea River runs to the south of the town. It drains the northern side of the Bluestack Mountains and flows in a westerly direction to meet the sea near Ardara. The Stracashel River drains a second glen to the north east of Glenties. It flows through the centre of the town in a deep gully before joining the Owenea to the south. Both rivers host Salmon and Trout and are within a Special Area of Conservation (SAC). The Owenea also hosts Freshwater Pearl Mussels. A third watercourse, the Gortnamucklagh, drains an area to the north of the town and flows in a south westerly direction to meet the Owenea River to the west of the GAA club. All of the rivers are subject to flash flooding following heavy rainfall.

As part of the Government’s National Development Plan 2018-2027, €1 billion has been committed to the development of flood relief measures across Ireland. As part of this commitment, a steering group was established between the Office of Public Works (OPW) and Donegal County Council to progress a flood relief scheme to alleviate the risk of flooding for Glenties. In July 2020, RPS were appointed Engineering and Environmental Consultants to develop a flood relief scheme that is technically, socially, environmentally and economically acceptable for Glenties. 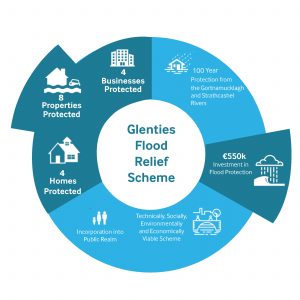 There have been a number of reported flooding incidents at Glenties including in 1989, 2011, 2012 and most recently in August 2019. It is thought that all of these events were due to the rivers around Glenties exceeding their banks. The flood event in 2019 resulted in extensive flooding to the GAA club grounds (Naomh Conaill). The Clos Naomh Conaill housing estate has been subject to recurring flooding but Donegal County Council have recently undertaken works to the drainage network to resolve this flooding.

To address flooding issues nationally, the Office of Public Works (OPW) commissioned and completed Catchment and Flood Risk Management (CFRAM) studies covering the entire country.  The North Western – Neagh Bann CFRAM Study was completed with support from Donegal County Council.  An output of the study identified flood risk areas, including Glenties, and the associated impacts of flooding. The Study also prepared Flood Risk Management Plans which set out the measures and policies to be pursued in order to achieve the most cost effective and sustainable management of flood risk.

RPS are appointed to complete a detailed project level engineering assessment for Glenties.  The assessment will involve identification of appropriate flood risk alleviation measures and preparation of detailed design drawings and documents.  Once complete, this body of work will facilitate submission of a planning application as per the Planning and Development Act (2000), the Planning and Development Regulations (2001) and subsequent construction of the scheme.  As part of the Scheme Development process RPS will carry out a Natura Impact Statement and Environmental Impact Assessment Report, where required under the relevant legislation.

The Environmental Constraints Study identifies environmental constraints to be considered in Scheme development (identifying a preferred option), design and construction. Topics within the Constraints Study Report include Population and Human Health; Biodiversity; Land, Soil, Water, Air and Climate; Material Assets, Cultural Heritage and Landscape. It will inform option development and the Environmental Impact Assessment for the emerging preferred scheme and includes a summary of the Opening Public Consultation help in November / December 2020. More information here.

Topographical surveys of watercourses, adjacent lands and property thresholds of residential and commercial premises were conducted in early 2021. Murphy Geospatial were appointed to carry out survey works in Glenties, which took place in January and February. More information here.