As part of the Government’s National Development Plan 2018-2027, €1 billion has been committed to the development of flood relief measures across Ireland. As part of this commitment, a steering group was established between the Office of Public Works (OPW) and Donegal County Council to progress a flood relief scheme to alleviate the risk of flooding for Castlefinn. In July 2020, RPS were appointed Engineering and Environmental Consultants to develop a flood relief scheme that is technically, socially, environmentally and economically acceptable for Castlefinn. 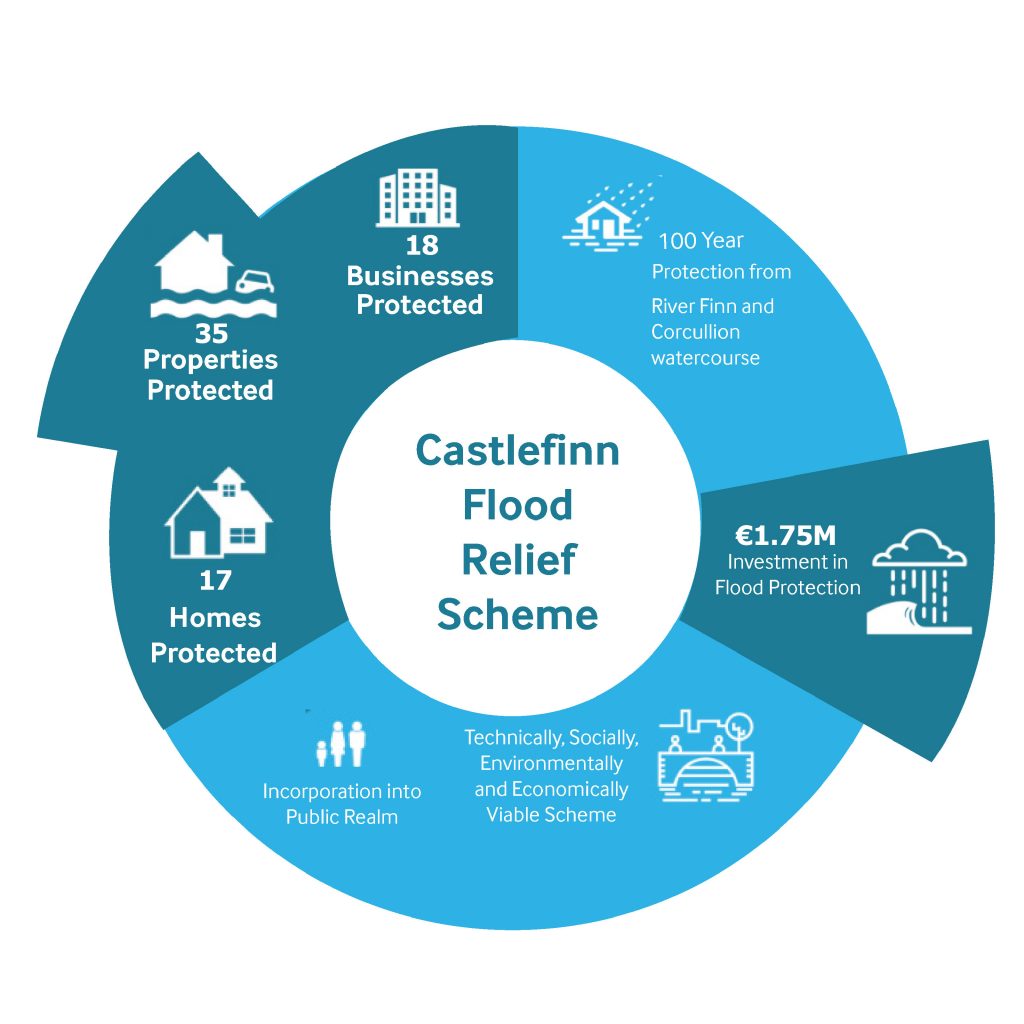 Castlefinn has had a history of serious flooding: the most recent occurrences being in November and December 2015. Numerous businesses and residential properties were flooded, including the Castlefinn Partnership Initiative (CPI) centre, during both events which were of a similar magnitude.

Both of the flood events in 2015 were due to the River Finn exceeding its banks leading to flood waters extending into the town. Flood flows from the tributaries could not discharge freely to the Finn and these watercourses acted as a route for floodwaters to back up into the town. Flood levels in the Finn were impacted by the flood conditions at the confluence of the Finn with the Mourne at Lifford with water backing up through the Finn Valley. Development of flood relief options will consider the interaction of flows in each these water bodies and the associated impact on flooding in Castlefinn.  Development of flood relief options will consider the impact on neighbouring communities of Clady, Lifford and Strabane in line with requirements of the EU Floods Directive.

To address flooding issues nationally, the Office of Public Works (OPW) commissioned and completed Catchment and Flood Risk Management (CFRAM) studies covering the entire country.  The CFRAM Study was completed with support from Donegal County Council.  An output of the study identified flood risk areas, including Castlefinn, and the associated impacts of flooding. The Study also prepared Flood Risk Management Plans which set out the measures and policies to be pursued in order to achieve the most cost effective and sustainable management of flood risk.

RPS are appointed to complete a detailed project level engineering assessment for Castlefinn.  The assessment will involve identification of appropriate flood risk alleviation measures and preparation of detailed design drawings and documents.  Once complete, this body of work will facilitate submission of a planning application as per the Planning and Development Act (2000), the Planning and Development Regulations (2001) and subsequent construction of the scheme.  As part of the Scheme Development process RPS will carry out a Natura Impact Statement and Environmental Impact Assessment Report, where required under the relevant legislation.

Topographical surveys of watercourses, adjacent lands and property thresholds of residential and commercial premises were conducted in early 2021. Murphy Geospatial were appointed to carry out survey works in Castlefinn, which took place in January and February. More information here.

In advance of the Castlefinn flood relief scheme, the Project Team has commenced work on invasive species treatment within the scheme area. Further information can be found under the News page.